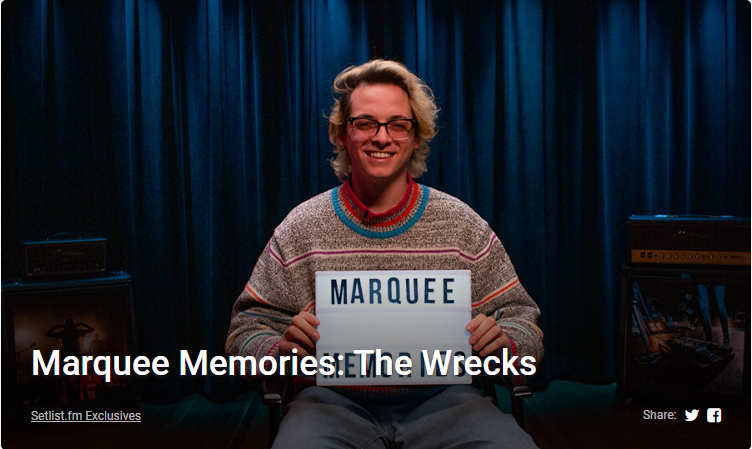 Nick from The Wrecks tells tales of three outstanding shows...

In a few short weeks The Wrecks will embark on a headlining tour, hoping to impress some live music memories upon their fans – maybe even some associated with their newest album, Sonder. But before the meeting and greeting and grand sing alongs commence, we caught up with frontman Nick Anderson to talk about some concert memories that stick out in his mind. He talks about Twenty One Pilots before they were a big deal, a curiously straightforward Augustana performance and how Cage The Elephant inspired some on stage confidence.

Twenty One Pilots:
“I saw Twenty One Pilots play at Mohawk Place in Buffalo, in 2012. I think it was a hundred cap room. It was a bar. A buddy of mine decided to make the drive up to Buffalo to see this small band. It blew my mind. The show was so good. They made this bar feel like an arena. I think it was the crowd engagement that made the show so good. Not only that, but they also talked to everyone after the show. We helped load out their gear into their trailer. I was asking Josh, I remember, “How does the singer know to stay in time when you’re playing, when there’s no music happening?” He goes, “Oh, there’s a click track.” I had no idea what he was talking about. He could tell I was really confused, so he asked for my Facebook, and he sent my buddy and I an essay-long Facebook message explaining exactly how the rig works, at one in the morning, while still on tour. As someone who’s now touring in a band, and meets kids all the time who are up-and-coming, and wanna be in bands, I’ve got time for everyone. I’ve never saved a concert ticket before, except for that concert ticket. I still have it.”
Augustana:
“I saw Augustana in 2015, maybe 14, I think. I used to cover “Boston” when I was in high school. The dude from Augustana comes out, looking very scruffy, very, it looks like he was just hiking, and he sits at the piano, and they played this set, and the show’s so good, very dynamic, song writing’s really good. I’ve never heard any of the songs, but they were all really good. But the singer didn’t say a word the entire show. About an hour into the set, someone in the audience goes, “Hey, Dan, say something.” And the dude just kind of stops, it was in-between songs, kind of turns to the audience and he goes, “I’m saying a lot, man.” And he goes back and he keeps playing. That has stuck with me since, because it’s like the funniest answer, and maybe the coolest answer you could possibly give. It couldn’t be me, I talk too much, but such a cool moment, and props to Dan from Augustana for being so cool.”
Cage The Elephant:
“I saw Cage the Elephant at a festival, like five years ago, maybe. It was one of the best rock shows I’ve ever seen. Watching a bunch of sets that day, a lot of electronic artists, a lot of alt artists with a lot of backing tracks, and then to kind of stumble on Cage the Elephant’s set, a band that I love, and I’ve loved for a while, it was just so incredible. And to watch a real rock band give a set that an entire festival crowd was into. The most impactful part of it for me, was watching Matt Shultz run around so much. I don’t know what his cardio regimen or routine is, but everyone should be on it. I take constant breaks throughout our set, because I’m constantly winded, no matter how much cardio I do. To be fair, I don’t do any.

“It’s his dancing. It’s his own moves. It’s like the way Mick Jagger has his own kind of flow to the way he dances to his own music. I think Matt Shultz has that too. It’s not dancing, as much as it is, just kind of flowing with everything. That’s something that I’ve kind of adopted, just gaining the confidence to move to your music the way that you want to.”

“I take notes a lot when I watch shows, and I think that that was something I was like, “Hey, don’t be afraid to get into the music you’re performing. And now it’s just a natural thing. I don’t really think about it.”
—
The Wrecks kick off their fall tour with a free show in Austin on September 30, followed by an appearance at Sonoma Harvest Festival. The headlining tour gets going on October 9 in Reno. Get a full list of dates via their official site – make a Wrecks show one of your Marquee Memories!
all news
share
join the list