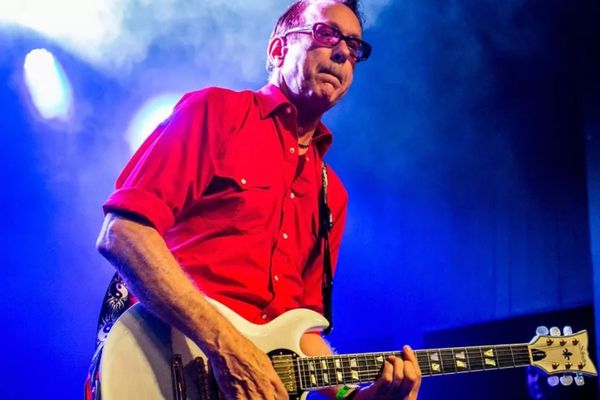 GUITAR WORLD: Dead Kennedys’ East Bay Ray: “Tape delay used to be like a galloping horse you were trying to hold onto. Now, all the horses are very well trained and in a box”

The Echoplex-toting punk-rocker reminisces about pushing sonic and gear boundaries on his group’s classic debut album, Fresh Fruit for Rotting Vegetables, ahead of its upcoming reissue

published about 7 hours ago

Certainly, one of the greatest punk rock albums of all time was Dead Kennedys’ debut full-length, Fresh Fruit for Rotting Vegetables. And now, the album has been reissued as a newly remixed version by veteran engineer Chris Lord-Alge.

Although they used punk rock as the basis of their sound, the group refused to be one-dimensional nor predictable, as heard by their original melding of surf music, jazz, psychedelia, rockabilly, and even spaghetti western soundtrack sounds.

Biafra’s lyrics were split between politically charged and humorous during their first go-round as a band. The group split in 1986, before reuniting in 2001 without Biafra.

And it was their 1980 debut that remains their strongest studio offering, as countless tunes that have gone on to become punk rock classics were included within, including Kill the Poor, Let’s Lynch the Landlord, Drug Me, California Uber Alles and Holiday in Cambodia.

Ray spoke with Guitar World shortly before the Fresh Fruit reissue dropped to discuss the California punk scene of yesteryear, the creation of the album, and his preferred gear both then and now.

How would you describe the punk scene at the time of Fresh Fruit for Rotting Vegetables?

“That was a really golden age – at least for us here in California, and particularly in San Francisco. We had a club called the Mabuhay Gardens – which was basically the [NYC music club] CBGB of San Francisco.

“And the promoter, Dirk Dirksen, he would book a punk band, an art band, and a new wave band all in one night. So, for a period of time, you had this mix of people and this mix of music that I think made everybody more interesting.

“Basically, the history of rock music in America is this cross-fertilization – country, gospel, R&B and all that mushing together. So to me, it’s really a golden age.

“We’d play and there were some independent halls. We’d do shows at the San Francisco Art Institute, we did a few shows in high schools under assumed names – one of the high schools had the chess club sponsor us! A very cool chess club.

“And we used the name ‘Pink Twinkies,’ and then at another high school we were ‘The Creamsickles.’ We played with some great bands – The Zeros, The Avengers.”

What do you recall about the writing and recording of the album? You are listed along with a gentleman named Norm as the two producers.

“Norm was not a gentleman! Norm is the cat that lived in Möbius Music Studios when we were working there.

“To be blunt, some people have taken credit for work that I’ve done, and a lot of ‘punk Taliban’ don’t recognize Klaus and my contribution to the band. I did the producing, organized the sessions, a lot of the sheets are all in my handwriting, and I did a lot of the mixing, along with Oliver DiCicco.

“He was quite a character – he had never really done punk rock or rock before. So, it was an experiment for us. He’s a fascinating character – he builds his own musical instruments. He doesn’t run the studio anymore, but he builds these instruments that are sculptures and music. He’s a very avant-garde musician here in the Bay Area.”

Fresh Fruit contains some of the band’s best known tunes – Kill the Poor, Let’s Lynch the Landlord, California Uber Alles and Holiday in Cambodia. Do you recall anything about those specific tunes?

“But the writing process, there were basically two processes. One, like Holiday in Cambodia, came out of a jam session – that was literally in my garage. Our first rehearsal studio was my garage, until the neighbors complained and we had to move. And we would tape it, and Biafra would go through his lyrics and find lyrics to fit the music.

“The other way we would do it is we would sit on the sofa at Klaus’s with an acoustic guitar. So, it would be Klaus, Biafra, and myself, going over the songs, finding keys, finding arrangements, finding chord changes.

“One of the interesting things I’d do is I’m from the East Bay, so I’d go across the bridge and I’d be listening to Merle Haggard on my car stereo. It helps with your songwriting structure – he’s kind of a master songwriter.”

What was your guitar setup at that time?

“And also, I can read schematics, so I added some Marshall-type modification in there. The Marshall amps were developed from the Fender Bassman amp in the mid-‘50s, so there’s a lot of similar tubes. So, it was basically a Super Reverb with the standard [Rumble] 410 Fender speakers.

“Then, the guitar – which I don’t take on the road, but I’d like to find a guitar manufacturer that would like to make a guitar [like] it to sell – is a Japanese Telecaster that has the 24.75″ scale. [That’s] the Gibson scale as opposed to the Fender scale, which I think is 25.5″.

“I put a good bridge on it and a Gibson bridge humbucker, and then I put one of the Seymour Duncan custom hot-wound single-coil pickups in the neck position. That’s basically what I used back in the day. And the effect was the classic Echoplex tape unit.”

How did you begin using the Echoplex and make it part of your sound?

“I bought it very early. Two guitar sounds that really made the little hairs on the back of my neck stand on end were Scotty Moore’s in Elvis’s The Sun Sessions. And in particular, Mystery Train – that slapback echo. And then the other one was Syd Barrett of Pink Floyd – [his was] kind of psychedelic. I’m probably more of a psychedelic guitar player than a rockabilly guitar player. [Laughs]

“So, I had one and had been fooling around with it. I actually put out an ambient record called Labyrinth – where I transferred some of the cassette stuff that I’d made in the ‘70s before Dead Kennedys to digital and put them out. The layering of the Echoplex – you can do ‘sound on sound’ with it. So, when the Dead Kennedys started, I knew my way around it.

“Our B-side, The Man with the Dogs, has me feeding it back and moving the head back and forth at the end. It’s feeding back and going crazy and we used to do that live and got to record it.

“It’s very difficult to do it now with the digital models. [Laughs] You can’t go wild – it’s like a galloping horse you’re trying to hold on to. Now, all the horses are very well trained… in a box.”

At what point did you realize Fresh Fruit was special and/or a potential classic?

“Way later. We kind of stopped playing in 1986 and I figured, ‘I’ll have to get a day job in about two years.’ Everybody in the band kind of did. We all tried solo projects, but the Dead Kennedys was a collaboration where two plus two equalled five.

“Then Nirvana came out and punk rock got kind of rediscovered. And it’s been kind of building since then.”

“On the road, I use a Schecter S-1 – because a couple of years ago, both Klaus and I lost some guitars at the airport. And they were cherished guitars. Particularly his – his was a Fender Jazz Bass from the ‘60s, which Tony Schroom, a guitar tech rebuilt for him a duplicate, with the dents, dings, and decals on it. It’s pretty cool.

“So now, I don’t want to carry any guitar that I don’t want to lose. I use the Schecter ones because you can get them at any Guitar Center. But they sound good – they have the Seymour Duncan pickups that I love.

“Like I said, I’m a nerd and can read schematics, but back in the day, I tried all the pickup companies – Bill Lawrence, DiMarzio. And Seymour Duncans, they just have that vintage, ‘magic dust’ sound of the pickups. They’re really musical, and they don’t feed back and squeal.

“And then I use a Line 6 DL4 for the echo. One of the advantages of it is it has three memories. With the Echoplex, I used to have a piece of tape where the head moves, and would mark the three different settings. So, one is a slapback, one is the echo of Holiday in Cambodia, and one is a really fast one for Police Truck.

“I had those three memorized, so that worked out perfect for that. I don’t use their tape delay model – I use a different setting. And the cool thing is you can put a little modulation on it.”

What’s on the horizon for you?

“Klaus, DH [Peligro, drummer], and I – with Skip [DK’s current singer] – are heading off to Europe in October. And then Skip, he and I recorded a record [Raising the Stakes] a number of years ago with Paul Leary of the Butthole Surfers producing.

“It’s called East Bay Ray and the Killer Smiles. It’s probably going to come out this fall [as a remixed and remastered version].”