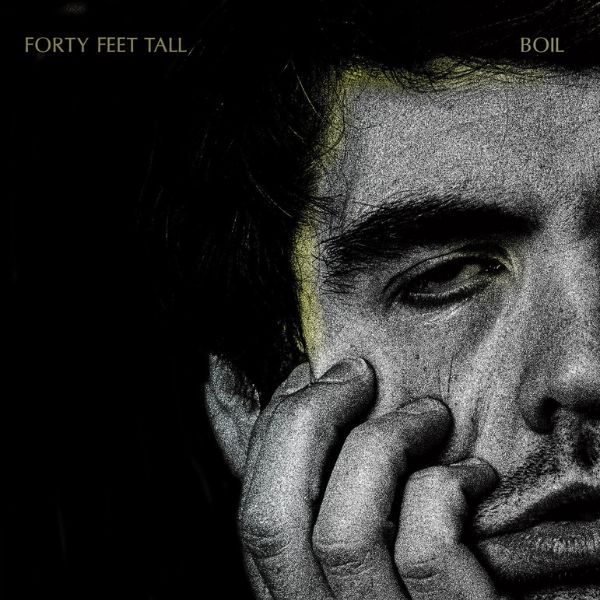 A great band is more than the sum of its players. Even an ensemble of seasoned virtuosos can’t deliver performances that transcend mere proficiency without establishing a rapport. If you hope to someday ignite audiences with songs full of passion and imagination, you must first open your own heart, mind, and ears to others.

Forty Feet Tall begins with a childhood friendship between Los Angeles natives Cole Gann (lead singer/guitar) and Jack Sehres (guitar). During their high school years, the duo’s band forged grunge, post-punk and alternative rock into its own sound. Forty Feet Tall started out small, playing a benefit to save the rainforest, but by graduation had built a following big enough to land them on stages including the Troubadour, Roxy and the Whiskey.

College took Jack to San Francisco and Cole to Portland, but the band continued to perform even as they focused on their studies. Forty Feet Tall released a self-titled album in 2014, followed a few years later by the Red Dressed EP. Bass player Brett Marquette came aboard in 2017; later the addition of drummer Ian Kelley solidified the quartet’s formidable rhythm section.

The band’s hard-edged, expansive sound drew attention from television and movie music supervisors. In recent years, you may have heard FFT originals on Showtime’s Shameless, several MTV spots, in the Paramount feature Drunk Wedding, and even an Arnold Schwarzenegger flick (Killing Gunther).

Yet the band’s new material, recorded with Portland polymath Cameron Spies (Radiation City, Night Heron), eclipses their earlier accomplishments. Already an audience favorite, lead single “BOIL” starts off taut and tense, escalates quickly, and explodes a few seconds past the one-minute mark. Memorable riffs turn somersaults over relentless grooves on “Big Red Bus” and “Sleep Walking.” At any moment, you may think of Archers of Loaf, the Killers, Pavement, or Pixies. Keep listening and uncover more surprises: the curious coda of dreamlike “Look Both Ways,” the subtle dynamics within “Chin Up.” FFT do not want for ideas, yet their songs stay sharply focused regardless of tempo or volume.

Ask the guys to name some of their favorite musicians and records, and the replies underline both idiosyncratic tastes and their intra-band dynamic. Everyone agrees on Radiohead’s In Rainbows, Parquet Courts Wide Awake! and all things related to Osees, but there are also votes for Alabama Shakes and Kendrick Lamar. Ian loves vintage R&B and soul, routinely whipping up 3-hour playlists of ‘60s and ‘70s favorites.

Forty Feet Tall not only listen to music together, they listen to each other. While any member can bring his ideas to band practice, most of their originals begin with collective improvisation and phone recordings; sometimes, Cole is still workshopping lyrics when they debut a new tune live. They share frank discussions about the state of the world, too. During the George Floyd protests, they braved rubber bullets and tear gas in the Rose City streets.

Forty Feet Tall isn’t afraid to say that the kids aren’t alright. That’s part of how they express love, for each other and their audience. Gigs routinely climax with incendiary showstoppers (“We Can’t Go Back to Normal,” “BOIL”) that find Cole tangled up in mic cords or diving into the crowd. But their outrage is anchored in hope, and a drive to do better. Whether there are three people or 3,000 in the crowd, FFT plays like lives are hanging in the balance.

In a sense, they are. These four friends want nothing more than to rock your socks off. As hilarious as they are on Tik Tok, they prefer to be up close and personal. The prohibitions of the pandemic years only amplified that desire. Their music may sound loud and confrontational, but the community they’ve built around it resonates with positivity. Forty Feet Tall is bigger than just Cole, Jack, Brett and Ian. Now it’s your chance to understand what makes them great. 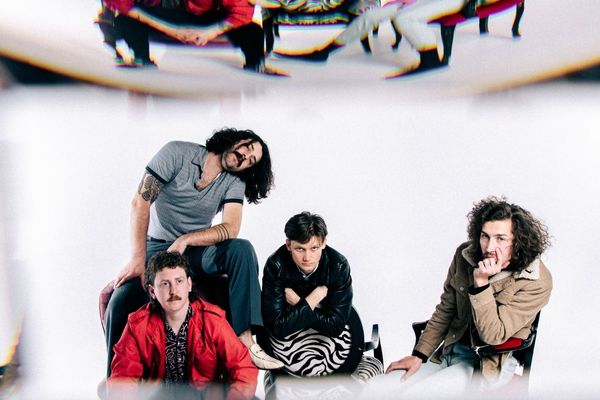 In 2014, the band released a self-titled full length album while still in college and followed it recently with an EP called “Red Dressed.” A number of their songs have been licensed and featured on shows like Showtime’s Shameless, the Arnold Schwarzenegger vehicle, “Killing Gunther,” the Paramount film “Drunk Wedding” and several MTV spots.

Forty Feet Tall’s sound is hard and riff-based, aggressive and expansive, somewhere between The Strokes and Queens of the Stone Age, yet framing some of the most well-crafted and sincere rock songs you’ve heard in years. Their newest material seems fitting for the tumultuous political landscape, with a more assailing post-punk intensity. These are the kinds of songs you hear for the first time and can’t help but wonder if they’ve always been there, like a song you can’t decide if you already know or if you just need to keep listening to it over and over again. And you will need to keep listening to them over and over again, because the songs (and the band) are just that good.

With a new album of songs already recorded and ready to go, Forty Feet Tall is moving forward at a rapid-fire pace as one of the most exciting new bands in rock music today. Their live shows are an explosive display of aggressive intensity, grounded by the songs that are the reason people keep coming back to see them again and again, and why they’re bringing new fans with them each time. Keep your eyes out and don’t blink for too long or you’ll miss the next move from this fiery young band.